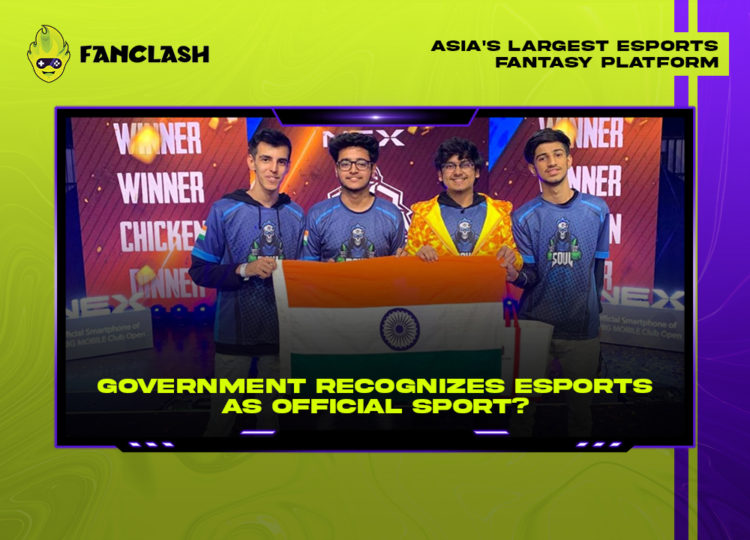 The structured, competitive video game market is known as “Esports.” Competing against one another in the very same video games, such as Fortnite, Counter-Strike, Overwatch, Madden NFL, and Call of Duty, are players from distinct leagues or teams.

These players are followed by millions of viewers who listen to live sporting events, watch games on TV, or track them online. Because viewers can watch their show players compete in real-time on streaming services like Twitch, popular gamers frequently grow their followings there.

Esports Fantasy is an easy idea to understand. From a pool of possible real-life players, you choose a virtual squad to compete against other people’s team selections. Your team collects points based on the actual performance of your selected players, which are then compared to the teams of other players to determine the winner.

Recognition Of Esports By the Government

Esports games will receive a huge boost from the country’s integration with traditional sports, according to a government announcement.

Esports is presently governed by the Ministry of Sports, a branch of the Youth Affairs Ministry and Sports. Video games will be acknowledged as a serious spectator sport since athletes play against one another in a range of game genres, according to official documents. This is a major development because the Indian gaming industry has campaigned for such governmental recognition.

Droupadi Murmu, the President of India, amended the regulations governing e-sports in accordance with the authority “accorded by stipulation (3) of article 77 of the Constitution” and requested that the Ministries of Information Technology and Electronics and Sports include e-Sports in multi-sport competitions.

The Indian administration is now debating how to regulate internet gambling in India. A task force was established to look into this issue. It was mandated for this task group to distinguish and classify games of skill from chance-based games that involved the use of actual money. Earlier, it was intended to restrict regulation to skill-based games. The office of Prime Minister Modi became involved, which gave rise to the concept of a single authority that oversees all types of online gambling.

“We have been attempting to distinguish eSports from iGaming for a long time, and now our attempts have been successful. We applaud our government for making this decision, which will create new prospects for greater investment in this developing sector.

Our young esports tournament players will require a good infrastructure, training facilities, and coaching. It won’t be long until esports are compared to sports like cricket, football, basketball, and others and reach the same levels of popularity, scale, and excitement”, according to Suji.

One of the world’s largest marketplaces for esports that is expanding the quickest is India. By 2025, esports will provide over 11,000 direct and indirect jobs, with a total economic effect of over $100 billion from investments, direct industry earnings, in-app sales, and other sources of income.

What will change after getting recognition from the Indian government?

The IT Minister will be the focal point for issues relating to online gaming after the President’s announcement on December 23, and the Sports Department must incorporate it into its curricula. For supporters of eSports, it has been a boost.

The first Olympic Esports Week will be held in Singapore in June of next year as part of the International Olympic Committee’s (IOC) aggressive efforts to popularize esport.

This is a significant step forward in encouraging the growth and inclusion of virtual sports in sports and in further interacting with competitive gamers.

Thus, this will mark Indian history as the most remarkable day when esports fantasy has been approved by the government, and this will be available on many platforms but is exclusively available on FanClash, which provides you with lots of different esports games and tournaments to play.

Users who participate in fantasy matches on FanClash have the opportunity to win cash prizes, making it Asia’s top and only esports fantasy site. Popular games including CS: GO, Valorant, PubG, and others are supported by FanClash’s Fantasy Esports.

A game of skill where you can apply your esports expertise is Esports Fantasy on FanClash. According to the applicable Indian legislation, skill-based games are not considered “gambling” or included in their description. Thus, participating in a contest on FanClash and earning money is acceptable, safe, and a lot of fun.