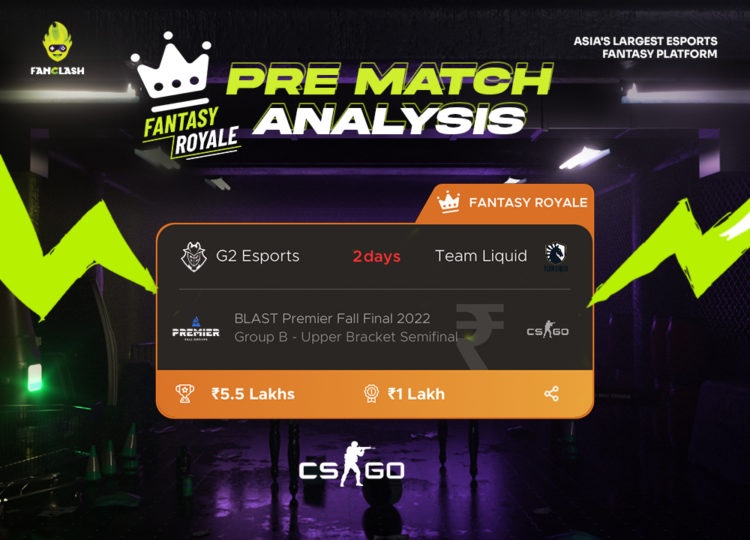 Now that the IEM Rio Major 2022 is over and the dust has settled, it is time for the teams to renew rivalries in the BLAST Premier Fall Final 2022 that commences from the 23rd of November this year. The event features eight top teams of the scene – Heroic, Natus Vincere, FaZe, Liquid, G2, Ninjas in Pyjamas, OG and Fluxo. The eight teams will battle it out in two groups that culminate in a single elimination playoffs bracket to crown the champion of this mega event.

Group B of BLAST Premier Fall Final 2022 pits Liquid and G2 against each other on the 23rd of November in a fixture that is scheduled to go live at 1130PM IST. However, since the matches are played on a rolling schedule, the game might start a few minutes earlier or later depending on when the match between Natus Vincere and Fluxo ends.

Before we delve into the specifics, make sure you download FanClash on your mobile phones in order to build your squad and take part in the Fantasy Royale.

By the Books (A Historical introduction to the fixture)

Liquid and G2 have only met each other once in a best-of-3 format before, with G2 scoring a 2-0 win in that fixture. However, recent form favours Liquid, especially since YEKINDAR’s addition. While G2 completely missed the IEM Rio Major 2022, Liquid narrowly missed out on a playoff spot in Brazil and have been on a steady rise.

G2 have been majorly inconsistent and you never know which G2 decides to show up against Liquid. However, Liquid do look good for the win and should have enough about them to navigate past their European counterparts.

We expect a closely-fought match though, which means it is likely to go to a third map. 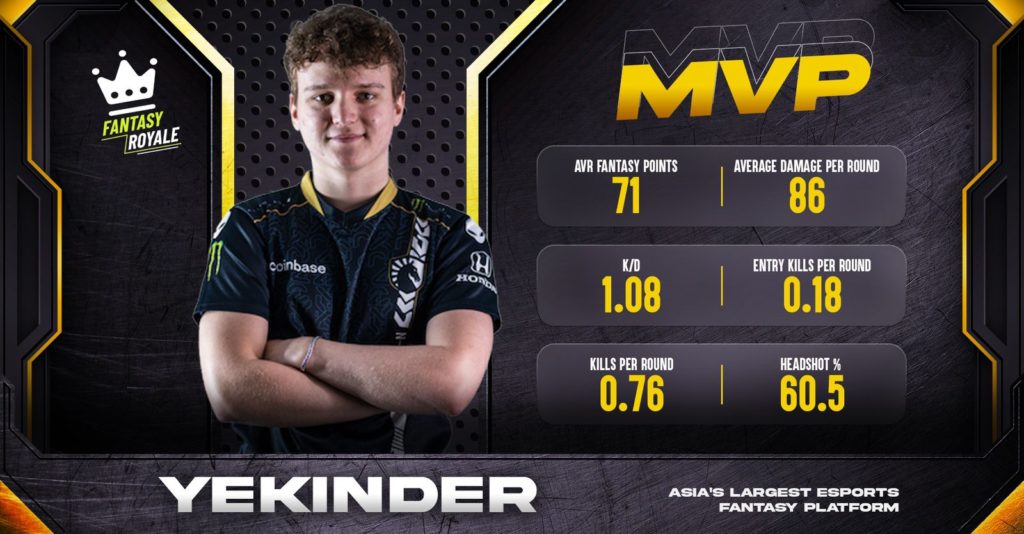 According to the average points earned on FanClash, Liquid rifler YEKINDAR should be the star pick in most fantasy teams. The 23-year-old scores 71 fantasy points on average for the last 3 months, the most among the 10 players on display, and will come at a modest price of 8.2 credits.

The Liquid star has an ADR of 86 and a KPR of 0.76, which is considerably high for an entry fragger. Regardless of the result, YEKINDAR is expected to add a handsome points tally to your score.

While YEKINDAR would be most people’s pick, his Liquid teammate EliGE has been the best North American player for a while now. The 25-year-old has been in HLTV’s Top 20 players for 5 years in a row and is expected to continue the same when they publish their rankings for 2022.

As far as FanClash users are concerned, it would be prudent to make EliGE as the vice-captain to make sure you have some multipliers in place. 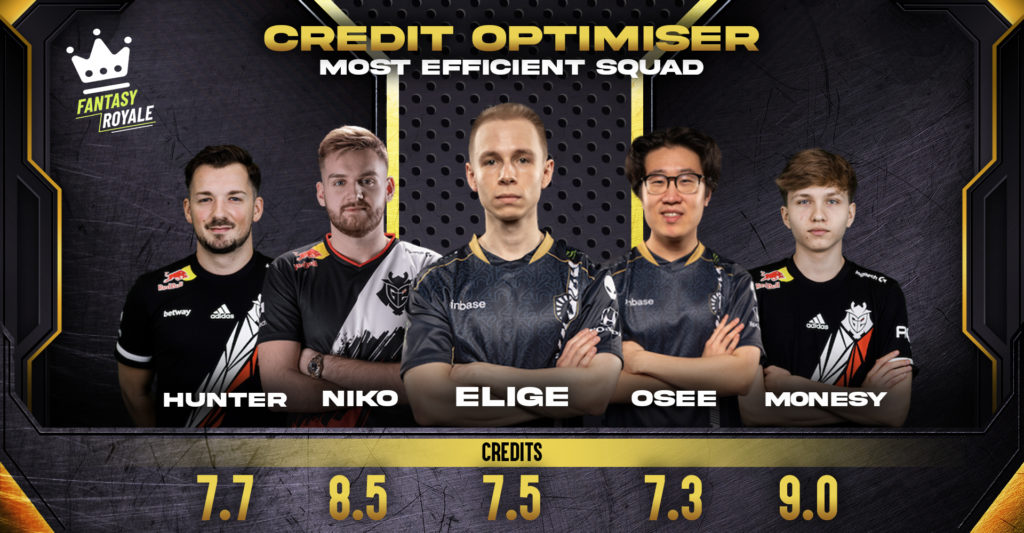 If you are a big fan of utilizing every point of credit in building your squad, this suggestion will be helpful. The squad provides you four powerful players in the form of EliGE, NiKo, huNter- and m0NESY while also adding oSee to complete the roster.

However, one aspect you have to consider while picking this squad is the fact that you would be hoping either for a G2 win or be prepared to lose out on the bonus points you can potentially gain if your players are from the winning side.

The Stacked squad (Best Squad according to Fantasy points)

Coincidentally, the squad that you would build while utilising every fraction of credit on FanClash would also turn out to be the one that is the best according to the fantasy points earned by players in the last 5 matches. 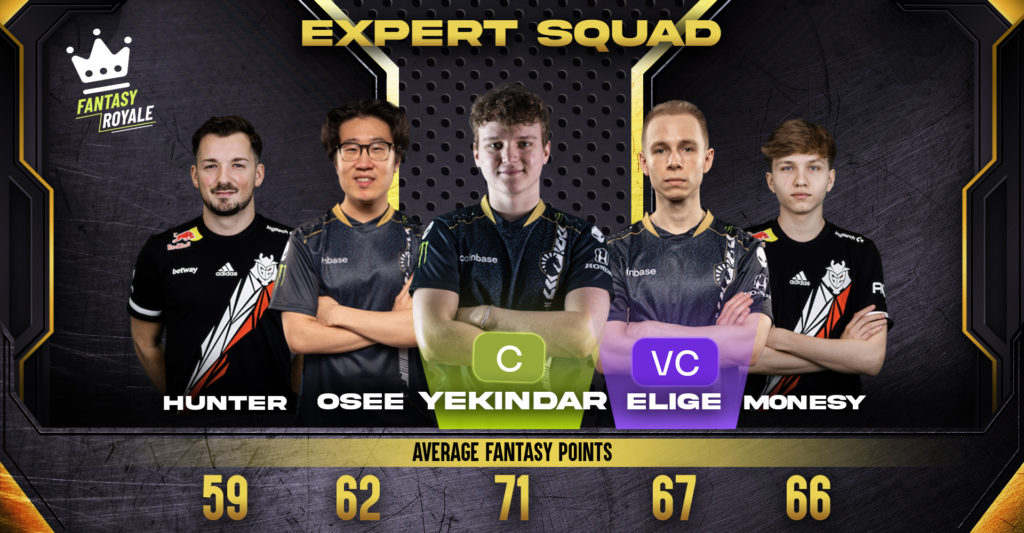 Since we are going with a Liquid win, it would be optimum to go for 3 Liquid players in your squad. YEKINDAR and EliGE are must-buys for the match while you should ideally go for m0NESY from G2.

It is a toss-up between NAF and oSee for the third and final Liquid player, with a lot of it dependent on the G2 player you decide to go for. The writer has gone for huNter- as his second G2 star, which leaves just 7.6 credits. This wouldn’t be enough for NAF and hence, you have to go with oSee to complete your squad.

Among the players, it would be prudent to go with YEKINDAR as the captain and EliGE as the vice-captain. 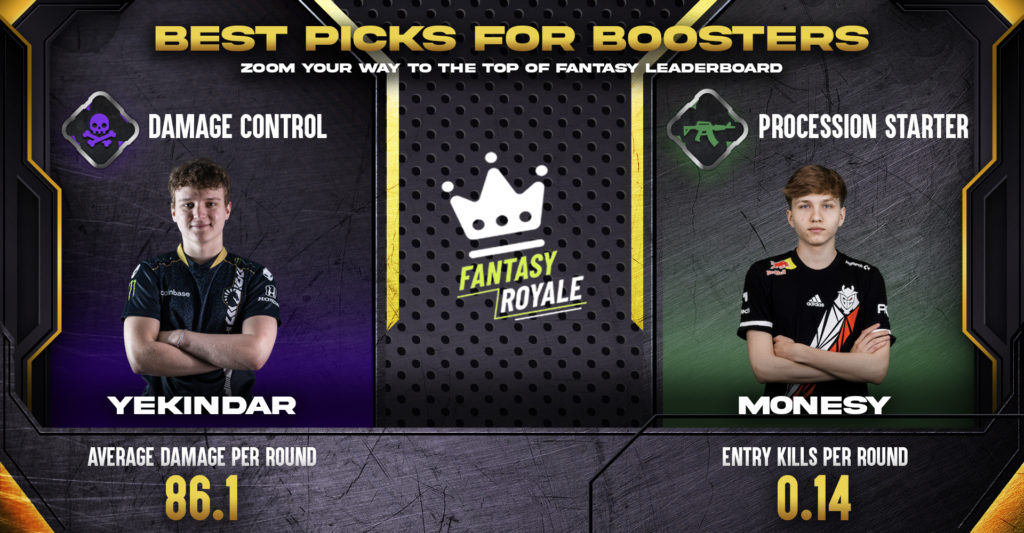 In terms of boosters, YEKINDAR can be a good option for the Damage Control Booster, which awards points for being the player with the highest ADR in the game. You can go with m0NESY for the Procession Starter Booster as the G2 AWPer is notorious for getting entry kills for his team.

Now that we have equipped you with the relevant information regarding the match between Liquid and G2, it is time to put your thinking cap on and build the best team(s) for the Fantasy Royale event.