Match Of The Day-Aftermath (CSGO): BIG VS Fnatic 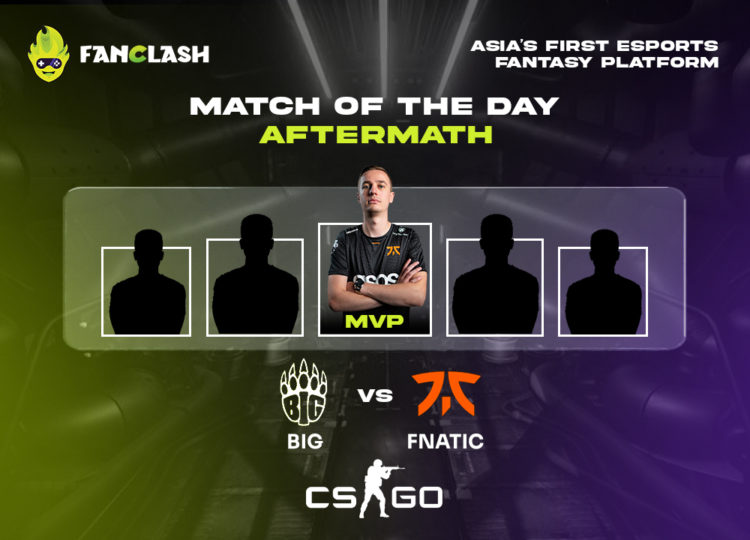 On the other hand, BIG have now fallen to a 2-2 record after starting the Legends Stage with straight wins. They must now battle Natus Vincere for a spot in the Champions Stage.

Let us now get down to how it unfolded on the Fantasy side of things on FanClash.

Dion “FASHR” Derksen earned the highest fantasy points, pocketing a total of 83.44 points over the entire series. The 26-year-old put in a monstrous performance on Overpass as Fnatic eked a 16-14 win on the map denying a late BIG comeback. The 2-0 also ensured the Matchsweep Stakes bonus for FASHR and his Fnatic teammates.

The 3.94% of the FanClash users who captained FASHR would be really glad about their decision to go for the 26-year-old over other popular choices like syrsoN or mezii.

While MVP is the highest point grosser, there are times when your investment in a player yields better returns than the MVP as well. The “Bang for Buck” section highlights the player that provides the most points for every credit spent on them.

The Fnatic star was also a great value-for-money addition for the users, costing 7.3 credits and returning a points total of 83.44 at a rate of 11.43 per credit. The closest to FASHR was KRIMZ, who returned 11.05 points per credit.

The FanClash Match of the Day winner amassed a total of 466.22 points. The decision to commit to a Fnatic win paid off, with 3 players from the team, also choosing KRIMZ and FASHR as the captain and vice-captain respectively.

Since there were 3 Fnatic players in the user’s squad, they earned the maximum possible Matchsweep Stakes bonus as well, thanks to the 2-0 scoreline. The winning user also used boosters to good effect, using the Frag Leader and Helping Hand on KRIMZ and FASHR respectively.

The Frag Leader booster should be put on the player you think will get the most kills in the series while Helping Hand is ideally used for players you believe will provide the most number of flash assists during the match. Furthermore, putting them on the captain and vice-captain multiplied the effect of the boosters for the user.

While the winning squad had 466.22 points with the use of 2 boosters, the highest a squad could have earned is 478.6, with a few tweaks to their squad while continuing to use the 2 boosters and keeping the same members.

The winning squad captained KRIMZ and made FASHR the vice-captain. But, had it been the other way around, it would have netted the user a few more points.