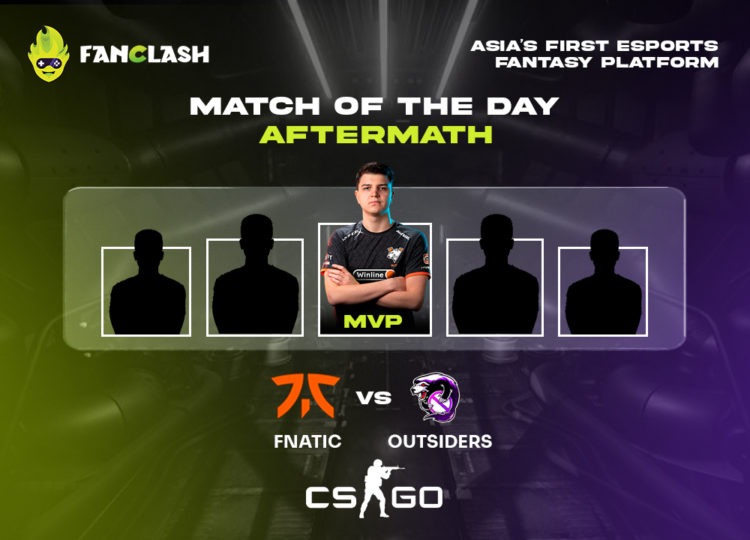 CT dominance pays off for Outsiders

Outsiders (former Virtus Pro) put in an assured display against Fnatic to wrap up the series 2-0 (16-11 Inferno, 16-8 Mirage) and advance into the semi-finals of IEM Rio Major 2022. Outsiders won 17 of the 24 CT rounds they played in the series, a record that helped them sweep Fnatic on the day.

We talked about Outsiders’ CT performance that helped them win on the day and it was FL1T leading the charge. The 21-year-old raked in an ADR of over 100 on the CT side in the series, with a total of 43 kills in the series.

His performance helped the FanClash users that picked him pocket a healthy tally of 80.88 points. Users would have earned a lot more had they captained the Outsiders star, with 12.69% of the squads choosing to do so, and used the Frag Leader Booster on him.

FL1T was also the most efficient point earner for the FanClash squads in Outsiders vs Fnatic. The 21-year-old returned 80.88 points while costing 9 credits at a rate of 8.99 points per credit.

His teammates Jame and Fame also stepped up to ensure a comfortable Outsiders win but their efficiency was a bit far off than FL1T. The FanClash users that picked all three wouldn’t mind though.

Everyone was looking at Jame and Fame to light up the server for Outsiders. FL1T proved he is just as good, with a performance matching his teammates.

For FanClash users, FL1T came in for a hefty cost of 9 credits but the choice to go for the 21-year-old more than paid off, with FL1T returning 80.88 points, 25.88 points above his usual Fanclash average.

Fnatic’s protagonist against BIG failed to show up in the playoffs, with FASHR not really leaving much of an impression on the server in the defeat to Outsiders. Not only did FASHR have the least number of kills (24) in the match, but he also dealt the least amount of damage at an ADR of 54.1.

FASHR scored just 20.41 points for the users, which is a massive 37.59 points away from his usual average fantasy points.

As it was fiscally impossible to get all three Outsiders performers (FL1T, Jame, fame) in the same lineup on FanClash, Qikert was a popular third pick from the CIS team. The winning team pocketed a total of 401.89 points, making the correct decision to captain FL1T and make Jame the vice-captain.

The winning squad also had the two Fnatic players that earned the highest points from their team – KRIMZ and roeJ. FL1T had the Frag Leader booster activated and the “I’ll watch you die” booster was applied to Jame, both of which came in handy for the squad.

Coincidentally, the winning squad and the OP squad are identical this time around. This means that the winning user made the optimum use of every information and credit available to him and selected the best possible combination of players, including the choice of captaincy, vice-captaincy, and boosters.