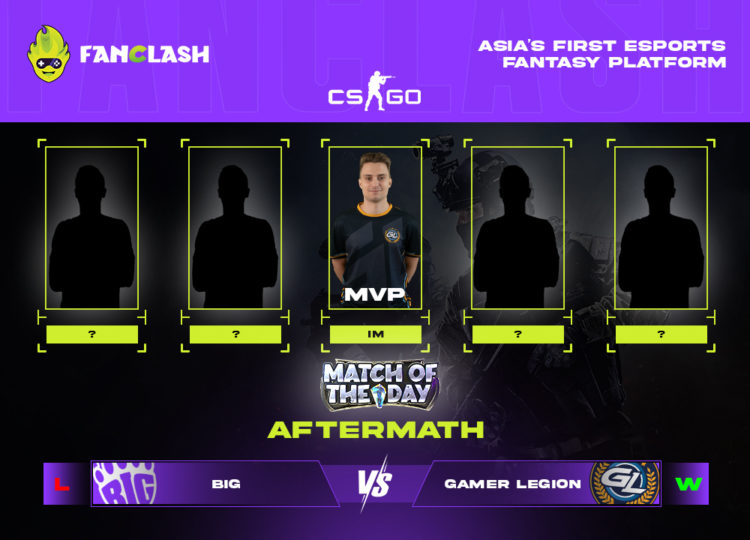 GamerLegion caused an upset on Day 1 of Elisa Masters Espoo 2022, beating BIG with a 16-14 scoreline on Overpass to register a shock result. Having returned from IEM Rio Major 2022 after narrowly missing out on the playoffs, BIG were expected to be one of the more dominant teams at the event.

However, the German roster ran into trouble on their T side, gathering just 3 rounds in the first half. Despite mounting a comeback, they were left with too much to do on the CT side and ended up on the losing side by a narrow margin.

Let us see how the game looked on the Fantasy side of things on Fanclash.

It was important for the GamerLegion players to step up and rise to the challenge posed by BIG. iM did exactly that, finishing the match with 34 kills to his name and an ADR of 130. His teammate siuhy was also up to the mark contributing 31 kills in this shock win. However, the bulk of the work was done in the first half, where it was iM who was relentless and had insane numbers to show, putting up 20 kills and an ADR of 140.7.

As far as the Fanclash users are concerned, iM netted them 58 points on the day, which was the highest among all, making him the most valuable pick of the match.

While his teammate iM did majority of the heavy lifting in the first half, siuhy provided exemplary support to him throughout the match, ending it on 31 kills. His performance earned him 56.75 points as per the Fanclash scoring system, something the users that picked him would be happy with.

Costing just 6.4, siuhy provided the return of 56.75 at a rate of 8.87 points per credit, which was the best, making him the most efficient pick for the match.

Only two players – iM and siuhy – performed above their average scores, which isn’t a shock given their incredible performance in the upset. iM scored 8 points above his usual average of 50 while siuhy outperformed his average of 37 by 19.75 points, making the latter the outlier in terms of performance.

While his team gained an invaluable victory at the Elisa Masters over BIG, acoR had a disappointing outing individually. The Dane had just 11 kills to show for his efforts along with an ADR that just crossed 50 (52.3).

acoR earned just 18.73 points, which is far below his average of 54, making him the biggest underperformer of the match.

4 squads were tied for the top spot after accumulating 322.93 points. The winning squads took the correct gamble of captaining iM and making siuhy the vice-captain. tabseN and faveN contributed nicely to the points tally, with Isak the choice for the 3rd GamerLegion star, another pick that paid dividends.

Coincidences have become normal these days, with the optimum squad being the same as the ones that won in the contest on the day.