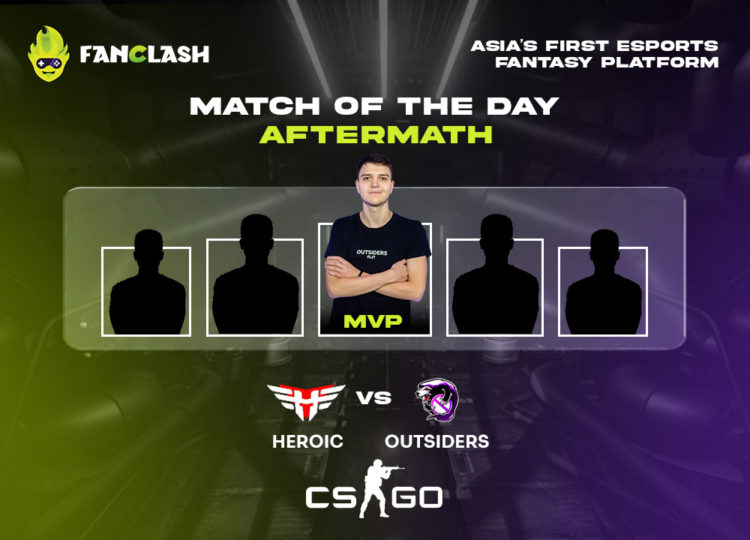 The curtains have been drawn to what can be called one of the most unpredictable csgo majors in a while. Outsiders (former Virtus Pro) have won the IEM Rio Major 2022, beating Heroic in straight maps (16-12 Mirage, 16-5 Overpass).

The charge for the CIS team was led by the trio of FL1T, Jame, and fame, who were all instrumental as the Heroic youngsters crumbled under the pressure of the final.

What a year it has been for FL1T. His team Outsiders, once labeled a threat, was dealt a heavy blow by the departure of YEK1NDAR. However, the 21-year-old stepped up and took over the reins from his fellow CIS star, and how!

Talk about performance, FL1T’s was worthy of the occasion, with the Outsiders player ending the series with not just 52 kills to his name, the highest on the day, but also with a momentous ADR of 112.6, a number you rarely see in matches between two top sides.

FL1T grabbed a total of 100.76 points for his Fanclash users and the ones who captained him would have enjoyed his display even more!

When you produce numbers are like that, you are bound to be the outlier as well. Even though FL1T cost Fanclash users a hefty tally of 9 credits, a return of 100.76 points meant that the investment was more than worth it.

The 21-year-old scored at a rate of 11.2 points for every credit and was the most efficient buy of the match for the Fanclash users. fame wasn’t far behind though, scoring 80.88 points at a rate of 10.11 points per credit.

FL1T normally averages a return of 57 points every game. An investment of 9 credits on the Outsiders star was a fair gamble and the 21-year-old repaid every bit of it, registering over 100 points for the match.

This means FL1T netted his Fanclash users 43.76 points above his usual score and that makes him the Surprise package of the match.

On a day when the entire Heroic team underperformed, people were expecting perhaps a bit more from stavn. The youngster has turned into Heroic’s marksman in this youthful side. But, against Outsiders, he was restricted to just 28 kills in the entire series.

As far as Fanclash is concerned, he scored his users a paltry sum of 27.27 points, which is 34.73 points away from his average points before the game.

This match turned out to be a high-scoring game in Fantasy, with the winning squad having to net 466.82 points to grab the first spot and 10,000 INR. The user rightly captained FL1T and fame, the two highest-scoring players of the match.

His boosters also came to fruition. However, he could have gained a bit extra had he used a booster on his vice-captain fame instead of Jame. But, as it turned out, his gamble paid off, with fame not really hitting any boosters.

His squad also contained the highest-scoring player on Heroic’s side, TeSeS while jabbi was more of a balancing pick.

All in all, a good result.

The optimum squad could have earned 467.49 points, just 0.67 points more than the winner. This just goes to show how efficient the triumphant user was with his selections, with identical squad picks, boosters, and captain choices.

The only difference came in the form of the balancing pick, wherein the OP Squad went with sjuush instead of jabbi.