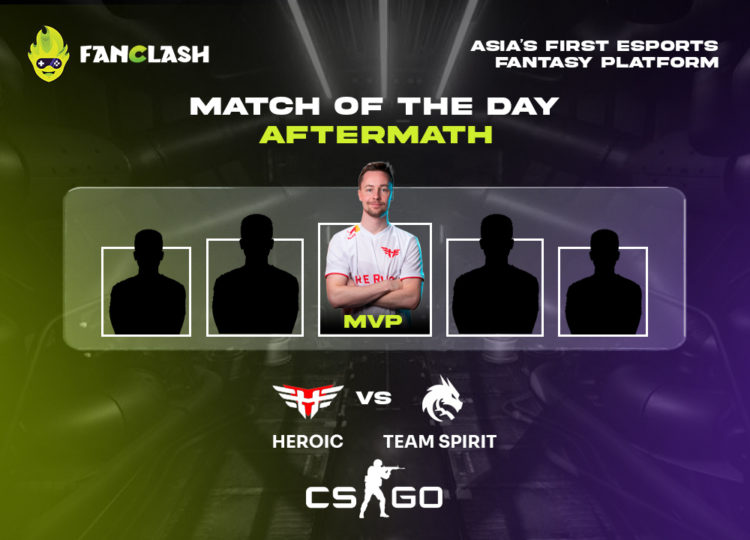 Heroic staved off a late Spirit comeback in the second map to close out the series 2-0 (16-8 Vertigo, 16-14 Overpass) and book their place in the semi-finals of IEM Rio Major 2022. Captain cadiaN came in clutch, pushing his side toward the semi-finals with a heroic display.

The Heroic captain has developed a taste for the clutches and he delivered another devastating one, this time a 1v3 in Round 14 on Overpass to dash Spirit’s hopes of a comeback. cadiaN ended the series with 40 kills to his name and the least number of deaths (29) over the two maps.

Overall, cadiaN provided the FanClash users with 67.39 points, the highest of the game, making him the most valuable pick for Heroic vs Spirit.

While cadiaN pulled the team up with his tenacity and clutches, Jabbi was an equal contributor. The 19-year-old ended the series with 40 kills, the same as cadiaN and returned the FanClash users a tally of 58.41 points.

This may pale in comparison to what cadiaN, stavn or w0nderful pocketed. But, coming in at 6.0 credits, Jabbi provided 9.73 points for every credit, making him the most efficient pick for the match.

Spirit just couldn’t match up to the Heroic star in what was a straight brawl between two of the youngest csgo squads in the scene right now.

W0nderful though, made the big bucks count. The youngster came in at a cost of 9.0 for FanClash users. However, even though Spirit folded in two maps, w0nderful made sure he returned a hefty tally of 64.68 points, which meant he still provided 9.68 points more than his average.

Thus, despite his high cost, the FanClash users that picked him would have rejoiced at the extra points they managed to pocket.

All eyes were on Patsi and w0nderful as Spirit took on Heroic. While the latter maintained his end of the bargain, Patsi came up short, putting in his worst display of IEM Rio Major 2022. He and s1ren found little joy during the match, with the two ending the series on 35 and 28 kills respectively.

It is rare to see the losing team’s player earn almost as many points as the Most Valuable Pick. But, in this case, w0nderful did so and the winning user’s choice to spend 9 of his 40 credits to pick the Ukrainian star paid off massively.

Along with that, the choice of captains and vice-captains along with the boosters also bore fruit for the winning squad. The sacrifice to get chopper in order to eke in w0nderful in this squad was a smart one.

The optimum squad would have scored a total of 419.73 points, which shows that the winning squad wasn’t far off. Both teams had cadiaN and stavn as the captain and vice-captain respectively, with both boosters coming to fruition. The difference maker was the choice of players that they went with in order to get w0nderful into the squad somehow.

The optimum squad went with Jabbi and Patsi, a combination that scored a little bit more than the combination of chopper and TeSeS.