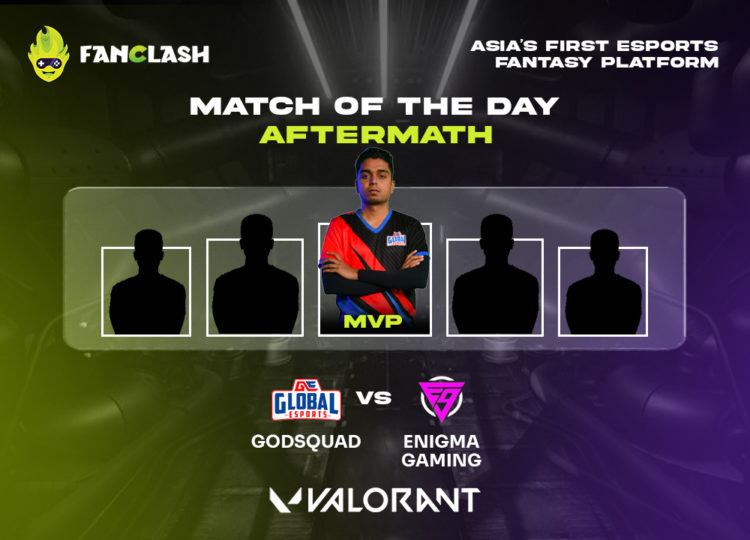 GodSquad (Global Esports) registered their second win in the South Asian Qualifiers of Skyesports SEA Championship, earning a straight-maps victory (13-5 Haven, 15-13 Pearl) over Enigma Gaming. SkRossi ended the match with 14 first kills to his name while every one of his teammates had more than 10 assists each over the two maps.

Who else but the “Indian Jett”, Sk Rossi! The GodSquad star had 50 kills over two maps, 14 of which gave his team an early man advantage. His kills also ensured his team wrapped things up in two maps, earning FanClash users Match Sweep Bonus as well for every player on GodSquad.

Despite his hefty cost of 9 credits, SkRossi was the most efficient pick for Fanclash users in this match. The GodSquad star scored 82.5 points at a rate of 9.17 credits per pick, which meant that he was worth every credit for the users.

SkRossi’s average return was 58 points, which means that the 82.5 points he scored in the match gave his Fanclash users 24.5 points more than usual. This helped users gain more than what they expected and hopefully earn a better placement in their FanClash event.

Skyesports SEA Championship South Asian Qualifiers have been a rather dull one for rawfiul, who has underperformed in EG’s matches thus far. The match against GodSquad continued the trend, with the former VLT Academy star finishing on just 24 kills and just 5 first kills for the match, something that is very rare for a duelist of his caliber.

Rawfiul earned just 18 points, 49 less than his average of 67, which is a massive disappointment for the FanClash users that picked him.

The winning squad had everything go its way, with SkRossi, Lightning Fast, and HellRanger turning out to be the best-performing GodSquad players as per FanClash points. The choice to go with Excali and antidote paid off, with the duo almost earning double each of their teammates managed on the day.

Kudos to the excellency.