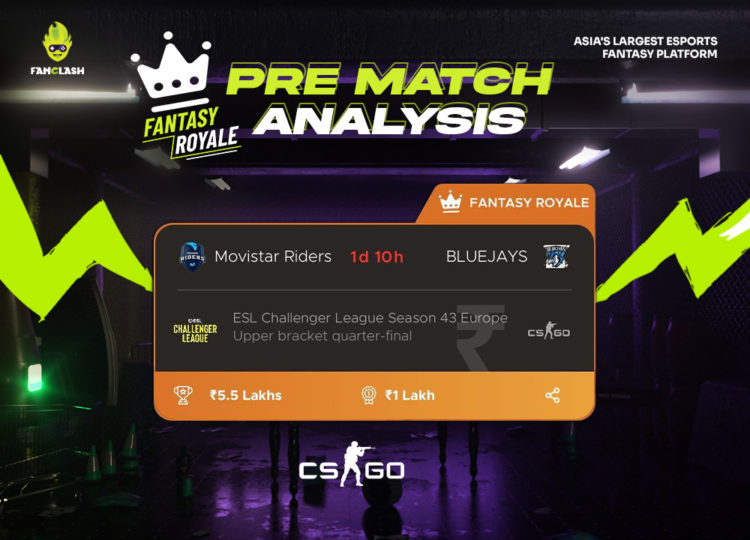 As we move onto the Upper Bracket Quarter-Finals of the European shard of ESL Challenger League Season 43, BLUEJAYS will lock horns with Movistar Riders to get one step closer to the coveted spot in the ESL Pro League Season 17 Conference.

Movistar Riders already have a spot at the ESL Pro League Season 17 Conference and are mostly playing to win the league title. Movistar Riders and BLUEJAYS both were direct entrants into the Round of 16 phase of the ESL Challenger League, with the former getting the better of it while BLUEJAYS brushed past Permitta.

By the Books (A Historical Introduction to the Fixture)

The two teams have never played each other up until now and it will be interesting to see how they match up on the server.

There is no looking past Movistar Riders for this fixture. Even though they already have a spot in the ESL Pro League Conference, the Spanish squad is likely to look at the Challenger League title as a motivator. BLUEJAYS are a good team but Movistar should have enough about them to move past their Macedonian counterparts. 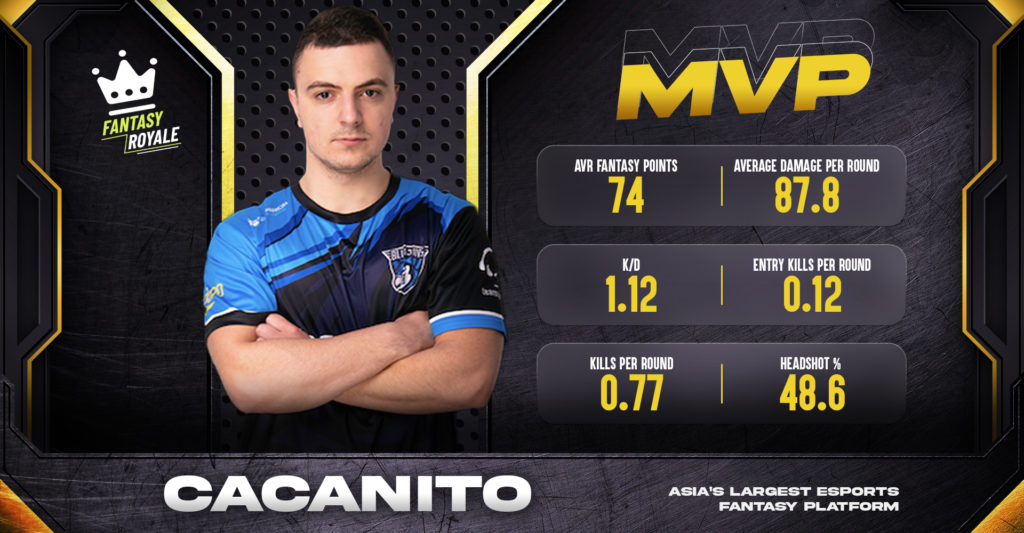 A player that is not just a superstar but also being looked at as the next player to potentially make the move to the big leagues soon, Movistar Riders star sausol is a must-have in your FanClash team. The 22-year-old has averaged 77 points over the last 3 months and is worth every fraction of the 7.9 credits he costs for the match.

From one 22-year-old to another, BLUEJAYS player CacaNito has been proving his mettle thus far. Averaging an ADR of 87.7 and a Kills Per Round of 0.77, CacaNito is another player looking to make his name and enter the realms of tier 1 Counter-Strike soon. 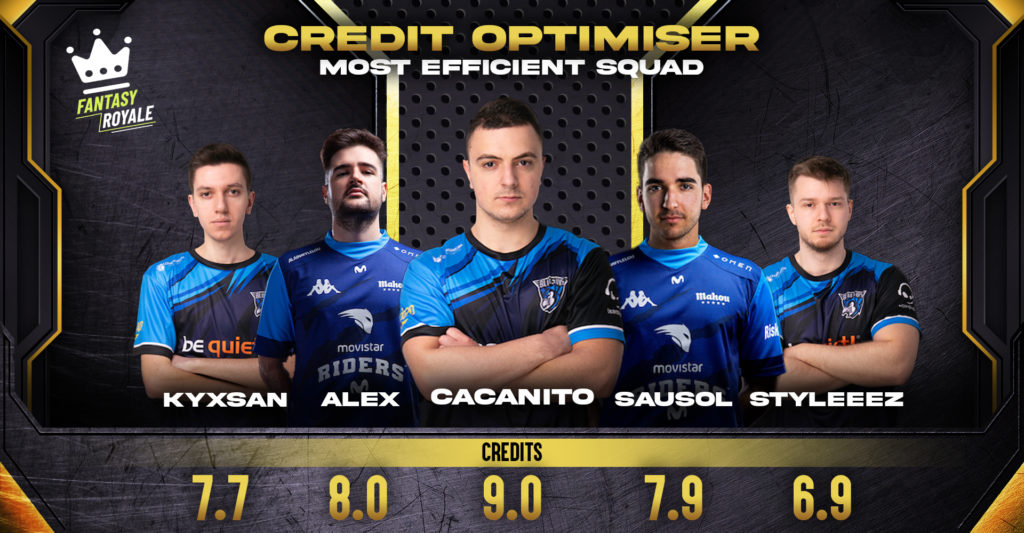 Looks like lady luck is shining bright. Even if you want to build your squad to utilize most of your credits, you will be able to squeeze in sausol, CacaNito and alex in the same squad. Kyxsan and stYleEeZ make up the rest of the squad, with the economically efficient squad recommending you go with 3 BLUEJAYS players.

The Stacked Squad (Best Squad according to Fantasy Points)

The only difference lies in the fact that the best squad possible hints at taking Martinez over alex while still maintaining the 3:2 ratio of BLUEJAYS and Movistar Riders stars in the squad. 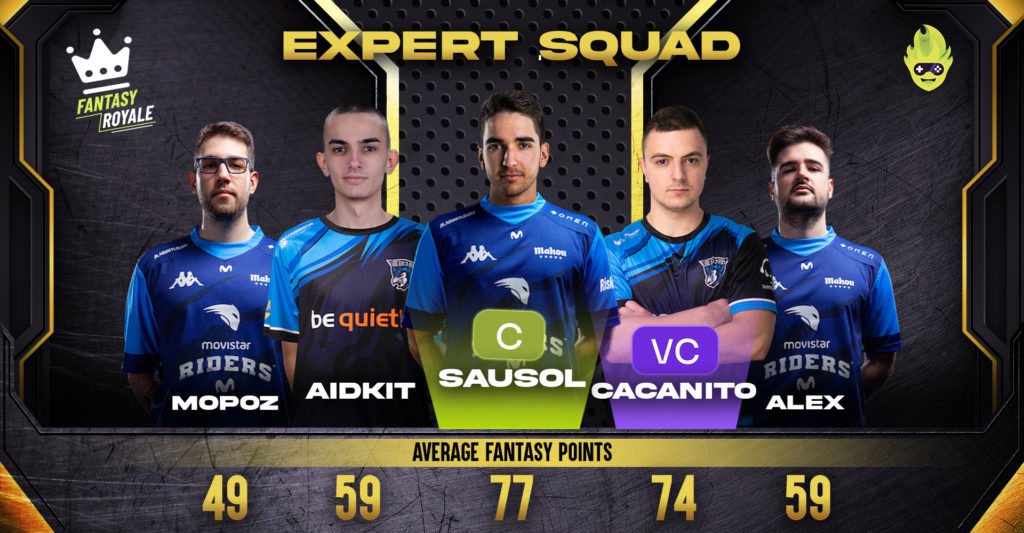 Two players that you must have in your squad are CacaNito and sausol. Now, since we predict a Movistar Riders victory, we would prefer to go with 3 players from that team. alex is another name that should be in your squad, regardless of whether you are going with 2 Movistar players or 3.

The second BLUEJAYS player is a toss-up between kyxsan and aidKiT, with both players having nearly the same potential. The writer has chosen to go with aidKiT, as the 21-year-old has slightly better statistics when it comes to KPR.

The writer has opted for mopoz as the filler for the squad. In terms of captaincy, we are going with sausol as the captain and surprisingly, CacaNito as the vice-captain, hoping that both the stars perform admirably on the day. 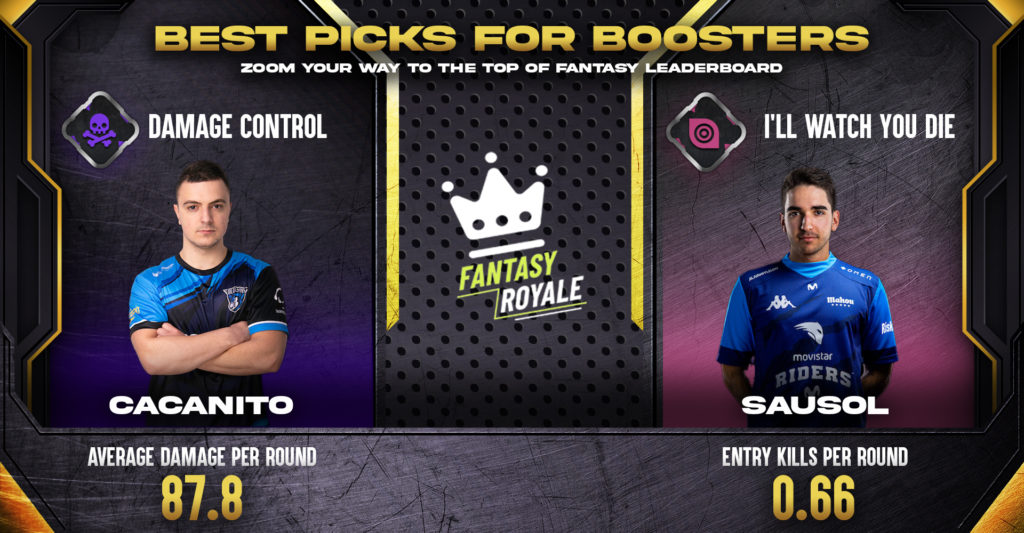 Ideally, the best options for captaincy and vice-captaincy are sausol, alex and CacaNito, depending on who you see winning. Regardless, all three aforementioned players should be on your team. Coming to other players, it is prudent to go for at least one of kyxsan and aidKiT to beef up your chances of winning the FanClash event.

In terms of boosters, CacaNito has the highest ADR among all players and is a suitable option for the Damage Control booster. sausol fits the bill for the “I’ll watch you die” booster as he could end up with the least number of deaths in the match while alex is a worthy choice for the Frag Leader booster, seeing as there is a good chance he ends up with the highest kills on the day.

Hurry up and register for the event; build your squads with the help of the information laid out here and make sure you go with your gut.