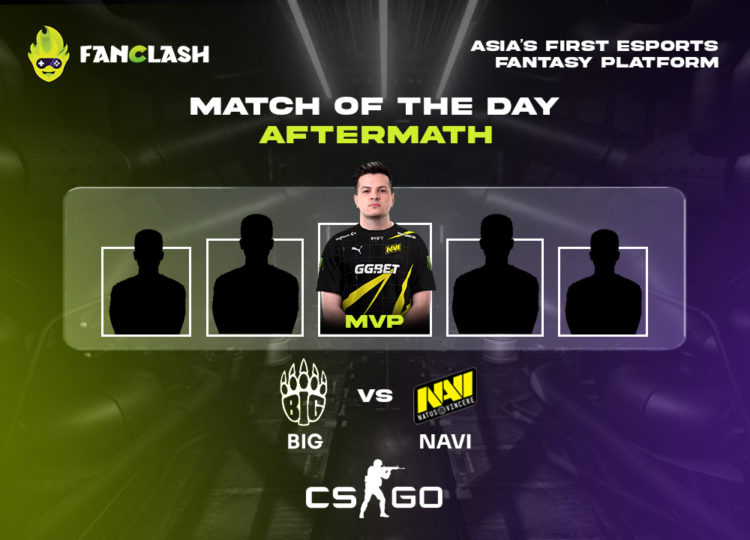 Natus Vincere are back where they belong as they swept BIG in a 2-0 (16-12 Mirage, 16-11 Dust2) win to lock their spot in the Champions stage of IEM Rio Major 2022. A simple masterclass on the CT side of Mirage helped Natus Vincere romp through BIG to record a 16-12 win on the map despite trailing 9-3 at one stage before closing the series out on Dust2.

The win ensures Natus Vincere a place in the playoffs of IEM Rio Major 2022 and the CIS organization will now lock horns with crowd favorites FURIA in the Quarter-Finals. As for BIG, the 2-0 start to the Legends Stage wasn’t enough and they will go home ruing their missed chances.

The experts have always highlighted the fact that the likes of Perfecto and b1t will have to regain their old form if Natus Vincere is to mount a challenge for the IEM Rio Major 2022. And against BIG, Perfecto showed glimpses of just how good he can be when the situation demands.

While s1mple was on a romp on the CT side of Mirage, Perfecto shined on Dust2 and carried Natus Vincere over the line. Perfecto had the highest points with a tally of 70.23 points to his name and deservedly so, with the 22-year-old ending the match with the most number of kills (43).

So, for the 3.68% of users that captained Perfecto, they would have earned a pocketful of points, especially if they decided to use the Frag Leader booster on him as well.

The surprise package features the player that overperforms the most on the match in relation to their average points earned on FanClash. For BIG vs Natus Vincere, it was Perfecto who shined brighter than usual.

The 22-year-old rifler usually nets his users 52 points on average. But, in this match, he earned users 70.23 points disregarding captaincy, vice-captaincy, and boosters. Other players who overperformed were b1t and Krimbo but their differential wasn’t as big as Perfecto’s.

FanClash users and Natus Vincere fans would both be wishing for Perfecto to continue this rise in form into the playoffs.

One of the main reasons for BIG’s inability to win over Natus Vincere on the day was a rare off-day for their star player tabseN. Usually, tabseN is the backbone of BIG, someone who nets his Fanclash users 59 points on average.

However, against Natus Vincere, tabseN ended the match with the least number of kills (24) on the server, which meant that his users could only earn 20.35 points for picking him in their Fanclash squad.

The FanClash Fantasy winner of BIG vs Natus Vincere earned 408.53 points, netting himself a healthy sum of 10,000 INR. The user was one of the rare ones who picked the combo of k1to and Krimbo for the 2 BIG players, with the duo ending up as the best-performing BIG stars of the match.

Also, his decision to captain Perfecto and make b1t the vice-captain earned him extra points. The choice to put the Healing Hand booster on b1t also paid off dividends. Ideally, the squad could have earned more had he not used the Damage Control booster on Perfecto, with electroNic ending up with the highest ADR in the match by a tiny margin. Still, a healthy tally and one worthy enough to beat the rest of the competition.

The OP squad suggested using the Frag Leader booster on Perfecto while putting the “Heads are all I see” Booster on b1t, with the latter ending the match with the most number of headshot kills (20).

Match Of The Day-Aftermath (CSGO): BIG VS Fnatic