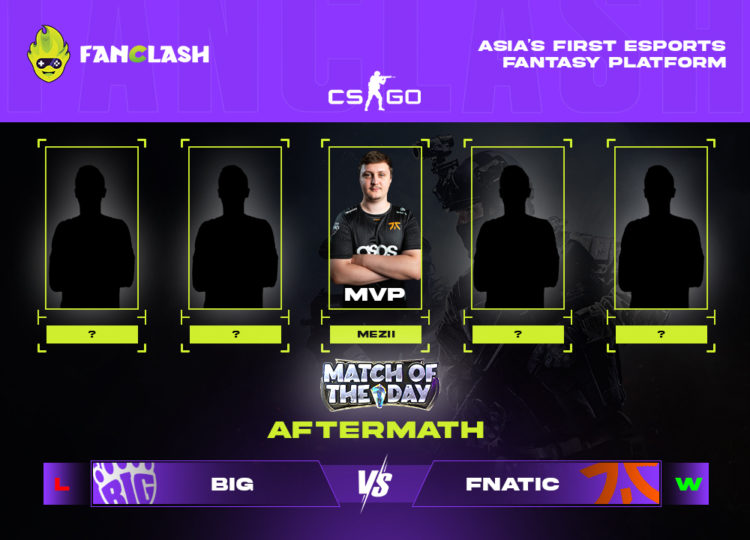 In what was an anti-climactic end to the Elisa Masters event, fnatic made quick work of BIG, who was just unable to mount any challenge as they lost unceremoniously by a 2-0 scoreline (16-4 Vertigo, 16-5 Overpass).

As fnatic cruised to victory, mezii and FASHR were instrumental in dismantling BIG the way that they did. The duo combined for a positive Kill/Death differential of 40, which really put Fnatic in a comfortable position.

However, it was mezii who narrowly outshined his teammate, with 38 kills to his name over the two maps. mezii also had the highest number of headshot kills (25) among the players, which helped him score 86.45 fantasy points. FanClash users that put a fitting booster on mezii and captained him would have added a good sum of fantasy points to their total tally.

While mezii finished the game with 86.45 fantasy points and certain other important markets, FASHR wasn’t far behind. The 26-year-old netted 84.85 fantasy points thanks to him putting up the highest ADR (98.5) of the series.

FASHR narrowly outpaced mezii to become the most economical buy of the match on FanClash, scoring fantasy points at the rate of 11.62 points per credit, just slightly higher than mezii’s rate of 11.53.

With the scoreline being as one-sided as it was on both the maps, it is not a surprise to see that all fnatic players outperformed their average on the day while all the BIG players massively missed the mark.

FASHR, mezii, roeJ and Peppzor all had massive gains over their usual points tally. However, mezii’s fantasy score of 86.45 points meant he netted users an extra 35.45 over his 3-month average, considerably more than the differential of other players.

Seldom have we seen a player return negative fantasy points in a best-of-3 match. But, faveN broke that record after his performance featuring 13 kills and 37 deaths saw him score a negative tally of 0.99 fantasy points.

This meant that he scored well below his 3-month average of 42 points and was easily the biggest underperformer of the match. Not a good outing for the German.

448.07 fantasy points was the benchmark score set by the winning squad for this match. The two players who starred in Fnatic’s victory – FASHR and mezii – were vice-captained and captained by the user along with the proper use of boosters to gain additional points on the two stars.

roeJ also helped the squad a lot, scoring 75.94 fantasy points while tabseN and Krimbo filled out the team well, adding some fantasy points to the total.

The best squad possible was already present in the contest this time, with the winning squad making full use of all the options and resources available to him and gaining the maximum points possible from the match.